A downloadable game for Windows

Puna & Sini are two demons slacking on guard duty, when a party of heroes invades their home dungeon! Now surrounded by furious former allies, the sisters have to slay each hero... or The Master will have their heads!

Chaos Sisters is a 2d animated beat'em up, where you fight hordes of varying monsters to get to the six invading heroes. The two playable characters have very different approach to combat: Puna focuses on fast and fierce melee action, while Sini conjures a wide arsenal of magical mayhem!

FREE DEMO AVAILABLE: Try out both characters in The Prologue & Stage 1!

Hiya, I'm Tuke! I'm a Finnish graphic designer, artist & game dev. I love beat'em ups and 'Vania games, so I always wanted to make a brawler that combines some of my favourite elements from the two things. Thank you for trying out the demo, all feedback is appreciated!

I'm sharing updates of development process on my Twitter!

Thanks for downloading the demo!

You can change controls in the main menu settings.

I love this SO MUCH! If it comes to switch I will spend all my money for it.

Thank you so much! I'm going to focus on PC relase, but once that is done I'll consider doing ported versions!

Awesome job with the demo! Puna is fun to play since I prefer close combat anyway but Sini is just as fun. I would love to see them as stream avatars characters as well!

Realy cool beat'em up! It's a good idea to give players the possibility to choose between two characters with one specializing in melee and another in range. I tried both of them and Sini is my favorite).

The combat system is rich enough to make every battle exciting. The game is well-balanced and provides a pleasurable experience. Boss battle is challenging and requires some skills and concentration to win it.

Especially want to note the beautiful graphics and design of the characters!

But I have one unpleasant moment on the location with savepoint where you need to use warp to climb to the next room, enemies down below are annoying, especially when after a failed use of warp I need to fight with them again, and so every time I respawn in this place.

Thank you very much! I'm very glad you liked it.
I'll be looking into tuning the difficulty of the first stage, I think overall I made it a bit too hard for new players. I will be adjusting enemy numbers & goblin AI in the future, to be a bit more lenient.

Nice beat'em up game! This game is on my Week's Top 5!

Wow, thank you so much!

lookin rad so far, as for feedback/bug reports from what I've played:

it feels like it takes slightly too long to register the direction held for a special, as even when I made absolutely certain I held a direction first I would get the neutral special with Puna unless I held the direction for a while first, which felt unresponsive

I had a similar unresponsiveness issue in trying to turn around without moving when deliberately trying to throw a neutral special in the opposite direction, as I wouldn't turn around before firing it unless I held the dpad for long enough

the last and most glaring thing for me personally was not getting the second light attack to come out whenever I hit the button at what seemed to be the very end of the input window, instead I would end up either walking in place or doing nothing at all, I'm gonna try to attach a video of it but I haven't done so before on this website so bear with me if I goof it up

Thanks for the feedback!
I will need to look into the code of directional inputs to make them more precise, you're not the only one who had issues.
That video is really helpful! My guess about what is happening is that the window to continue into 2nd light attack is longer than the light attack itself, so you're stuck in place while having already returned to idle/walk animations. This will be fixed as well!

Reply
Hikiyami Moriko pixelated Vtuber1 year ago(+1)
Really well crafted beat em up, I really enjoyed the metroidvania aspects of the game, I decided to play Sini because The fact that she uses spells instead of melee attacks is really interesting and surprisingly fun, saving a spell for later use adds so much strategy to simple fights.

What to say about the graphics and animations, they are all great, specially the walking cycle for the sisters, the poses while charging Sini's spells are  gorgeous. And of course the CG's for the narration of the story.

I also enjoyed the variety of enemies and maps, even if is just a demo there is a lot to see and fight.

The boss battle is absolutely awesome, and it gives the best kind of Megaman/Metroid feels.

For little suggestions that I hope you don't mind:

-The game feels a little "zoomed in" and even tho that help on appreciating the art I feel like the maps are a little small and doesn't allow for  a lot of movement. (Not that it ruins the experience or anything, it may be just me).

-My biggest problem was that dash on Shift key procs the fabled sticky keys and gets me killed a lot, specially on the boss.

-Sini's combo count is a little hard to get up, I didn't manage to see the SUPER and I really wanted to. I know is supposed to be the harder difficulty but maybe make the spells hit more times for the same damage.

-Maybe add a tutorial with the actual keys later, even though the controls are very intuitive, some people may have trouble following the tutorial without them.

-A map for later when the world gets huge.

-Make the boss text skippable after the first time maybe.

Again, I really loved this game, so much fun and really well done, this is just some friendly feedback, hope I didn't say too much.

Thanks for the feedback, having a video recording is really appreciated!

-I want to add more variety in room sizes later on. Having more space to move in affects the difficulty of encounters, especially with Sini!

-You're not the only one to complain about default warp key. I think I'll change the default keys from shift + asd to asdf in the future. At the same note, going to add key indications to the tutorial, along with other changes.

-There's already an option to skip cutscenes, but I think I'll add a specific exception to remove the scene when dying to the boss. 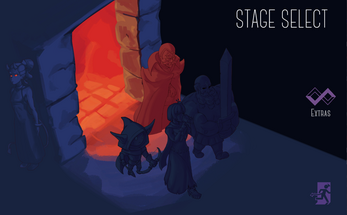